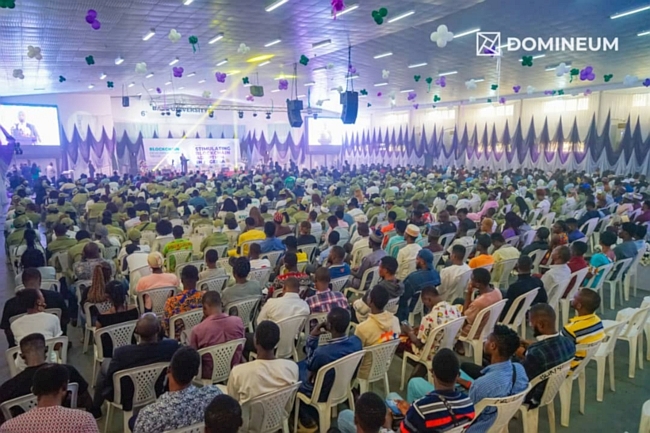 People came from various parts of the country to participate in Blockchain Developers Summit 2022, the first and premier Blockchain summit in Nigeria. [Image: Domineum]

Blockchain Developers Summit (BDS) is an international blockchain event aiming to help startups build solutions that can help address local needs by bringing together developers, startups, government, blockchain enthusiasts, industry and academia, offering exposure to BSV Blockchain resources and networks, and leading to the activation of the BSV Blockchain ecosystem in Africa.

The BDS 2022 Edition welcomed a record number of 1,500 participants, making it the largest Blockchain gathering in Africa. BDS 2022 was hosted over 15 sessions - networking sessions and panel sessions with industry experts - to discuss Blockchain and its adoption in Africa. BDS aimed to educate, impact and develop attendees with proper knowledge of Cryptocurrency and Blockchain, teaching them to leverage blockchain technology in everyday life.

The two-day event was held at Baze University, Abuja. As an official partner of Domineum Blockchain Solutions, the Industry plus Academia partnership officially launched the Blockchain-AI Lab at the summit. This is the first of its kind in Africa, poised to build and unlock potential by exploring the powerful capabilities BSV Blockchain offers, thereby accelerating blockchain adoption.

Speaking for the vision and motive behind the summit, Local Organising Committee Chairman and Domineum co-founder Mr Mohammed Ibrahim Jega said, "Blockchain is a technology that houses Cryptocurrency and many various ideas. It is important to demystify it, enable young people to take a proper grasp and expose themselves to this game-changing technology and take advantage of the numerous opportunities it presents."

Domineum Blockchain COO Mr Chima Achu, who gave the welcome address on behalf of the Domineum team, said, "The goal of the summit is to unravel the mysteries behind Blockchain, debunk the myths and reinstate the facts clearly. As well as to provide exposure to youths to the many opportunities in the space."

Day 1 primarily centered on the local tech ecosystem and how blockchain is becoming integrated. Speakers who took to the stage spoke about blockchain's role in the future of Nigeria and why the ordinary Nigerian should be excited about the direction the country is taking. Keynote speaker Kashifu Inuwa, Director-General, NITDA reiterated the Agency's stance on emerging technologies and laid out Nigeria's Blockchain Adoption Strategies.

Day 1 also featured a pitch session in which three startups - TechBross, Green Life Energy, and Eduvacity -pitched to the attendees, explaining how their ideas could solve critical challenges facing the West African nation and beyond.

Day 2 saw the BSV Blockchain team officially launch the BSV ecosystem in Africa and announced the BSV Academy in Nigeria. Three of the BSV ecosystem's innovators and startup founders took the stage for a panel discussion. Moderated by Domineum's Mohammed Ibrahim Jega, they discussed how their startups are solving various challenges, leveraging BSV's massive scaling.

Day 2 also saw three more startups making their pitches. By the end of it, TechBross emerged as the winner, attracting the interest of Satoshi Block Dojo, the Bitcoin industry's leading startup incubator.

Blockchain Developers Summit was an ample opportunity to connect with like minds and boost one's professional network. BDS is a pacesetter, leading the drive to the adoption of blockchain in Nigeria, and looking forward to seeing more young scholars doing great things in the blockchain and crypto space.

Watch highlights and the full summit video on YouTube at https://youtu.be/l7BagJvuJe0.

We look forward to the 2.0 of this summit as version 1.0 was such a mind-blowing success!