As energy prices soar, there is some good news on the energy front, according to the latest  SolarQuotes Solar Price Index.

The average cost per watt for solar power systems dropped in most Australian states in March.

Average installed cost per watt (all system sizes) dropped by 4c in Queensland, 9c in the ACT, a whopping 17c in Victoria and 2c in South Australia.

By contrast, in New South Wales prices jumped 12c. Western Australia saw an increase of 6c, due to higher average pricing for a handful of systems in the 6kW (not 6.6kW) category. The following table shows how March 2022 was shaping up compared to February, and compared to March in 2021. 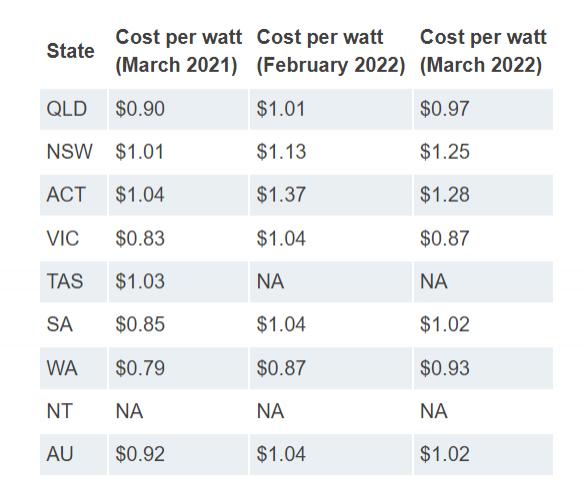 These figures are generated by the SolarQuotes Australian Solar Price Index, a tool providing historical pricing in each state and nationally. The Index also offers filters enabling generation of reports on various system capacities and components.

The averages for March 2022 are calculated based on details from 257 Australian system purchasers who shared what they paid when submitting solar installer reviews on solarquotes.com.au. These included reviews of businesses not within the SQ installer network. Figures and graphs are generated in real-time as new reviews come in, so the results for March (and other months) are subject to change.

Looking at individual states, while Western Australia usually has the lowest system pricing driven by fierce competition in the Perth metropolitan area, Victoria appeared to have the cheapest solar in Australia in March 2022 on a cost-per-watt basis.

“This is the lowest cost we’ve seen in Victoria since July last year,” says SolarQuotes founder Finn Peacock. “While the situation can change month-to-month, now could be a particularly good time to take advantage of Victoria’s solar panel rebate.”

Again, Victoria led the way in terms of the biggest decrease, but there were also reductions in Queensland, Victoria, South Australia and Western Australia. The average 6.6kW system price in New South Wales headed north again, with not enough data for ACT, TAS and the NT to make a useful comparison at this point.

“Whether system prices are heading up or down, the best time to buy a solar power system is usually right now to avoid further locking in high household power bills,” Mr Peacock says.

“It looks like electricity bills could also be higher for many Australians soon due to pressure on wholesale energy prices. The good news for solar owners is this could also mean higher feed-in tariffs – but the focus these days should still be on self-consumption to maximise value.”

SolarQuotes.com.au  is an independent online reviews website dedicated to linking solar buyers with the best solar providers in their area, using industry knowledge and the power of consumer feedback.

Since 2009, SolarQuotes has helped more than 600,000 Australians seeking quotations on solar systems from accredited suppliers in its network across 2,953 Australian postcodes.

“Over the last 13 years we have steadily built a network of 509 solar installers across Australia we trust to provide quotes,” says Mr. Peacock. “And we have turned away hundreds more. Our sole mission is to give consumers the advantage of informed choice from installers who have already been thoroughly vetted.”

The SolarQuotes website has built a reputation of being Australia’s most comprehensive and reliable source of information about home solar power and battery storage. It provides consumers with the advice and insight they need to go solar and, once installed, the best ways to maximise value from their systems.

To get an instant estimate on how much you could be saving on household energy bills by installing a solar power system, try SQ’s solar calculator. For at-a-glance pricing ranges for good quality systems, check out solar panel costs.

Find out more at https://www.solarquotes.com.au/

The SolarQuotes website has built a reputation of being Australia’s most comprehensive and reliable source of information about home solar power and battery storage. It provides consumers with the advice and insight they need to go solar and, once install