The 7th Annual Winnovation Awards have recognised the South Australian women who are contributing to the state’s innovation economy by creating jobs, wealth and solutions to address some of the world’s biggest problems.

These winners – and all the finalists in this record breaking year for the highly respected program – have overcome daunting hurdles to succeed in their chosen business or career, from personalised medicine for cancer patients, to protecting coastal ecosystems, to keeping indigenous culture and language relevant for new generations. 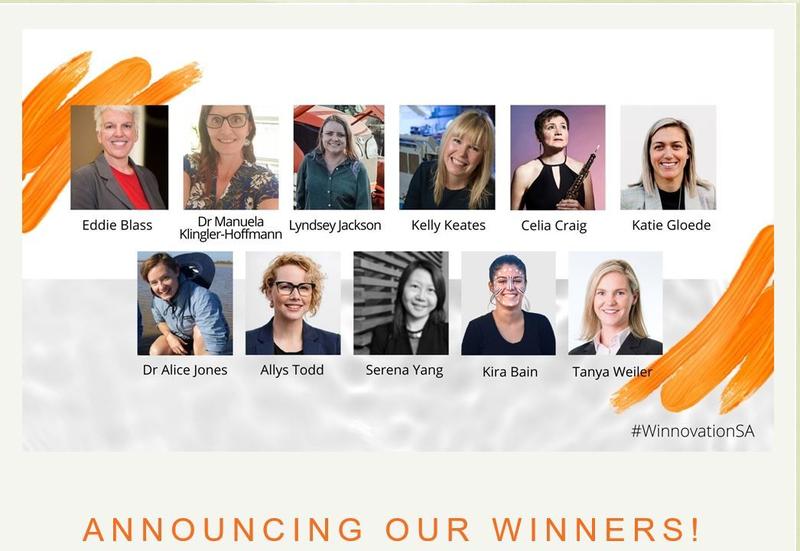 Among the winning innovations are a maths and science education system that uses footy to attract young students to STEM careers; a remote leak detection system that can save millions of dollars for industry; and an Australian-first disaster waste management plan deployed to manage the cleanup after last season’s devastating bushfires.

Ms Swaine said that since its inception in 2014, Winnovation Award finalists and winners have been the driving force behind a range of exciting start-up success stories, innovative and often lifesaving research, and entrepreneurial projects within business and government.

“The women behind these achievements have not only been showcased in South Australia but across Australia and on the world stage,” she said.

“In the past year we have noticed a new wave of support for female innovators - governments are committing millions of dollars to invest in women like our winners, our finalists and our community. We’re definitely seeing a shift, but the real shift will come when women are attracting 50 percent of angel and venture capital, when they are visible on 50 percent of private, public and government boards – and when their voice is heard as peacemakers and negotiators as well as in board rooms and parliaments!”

Each winner takes home a stunning piece of blown glass art, custom made for the Winnovation Awards by artist Emma Klau.

The SCIENCE Award, sponsored by the Department for Environment and Water, was won by Dr Manuela Klingler-Hoffmann of University of South Australia, who is fulfilling the vision to make personalised medicine a reality by developing disruptive laboratory technology to compare different treatments for ovarian cancer.

The TECHNOLOGY Award, sponsored by Madderns Patent and Trademark Attorneys, was won by Lyndsey Jackson, the co-founder and Chief Technology Officer of agtech start-up Platfarm, a platform that enables farmers to use any smart device, such as a mobile phone, to take data off the map and into the field, turning insights into action.

The ENGINEERING Award, sponsored by the University of South Australia, was won by Kelly Keates, managing director of Zonge Engineering and co-creator of Liquid Integrity Systems, an innovative tech company. She has developed and commercialised a world first real-time leak detection system for large liquid storage facilities, saving millions of dollars for industry and helping to protect our environment.

The ARTS Award, sponsored by winemaker Zonte’s Foostep, was won by Celia Craig of Artaria, which offers immersive audiovisual online experiences in an engaging interface that brings unique world class musical artistry and instruction direct to a global audience.

The MATHS & DATA Award, sponsored by the Office of the Chief Entrepreneur and FIXE, was won by Katie Gloede of Adelaide Football Club. Ms Gloede developed STEMfooty, a free bespoke integrated program for schools using AFL as the vehicle to engage the interest of students, in particular female students, in the STEM curriculum and employment pathways.

The REGIONAL, RURAL & REMOTE Award, sponsored by Bendigo Bank, was won by Dr Alice Jones of the University of Adelaide, who is researching the management of the State’s coastal ecosystems to help reduce climate change and its impact on coastal communities.

The OPEN Award, which covers education, community and other fields, was sponsored by Accenture, and won by Eddie Blass of Inventorium, who has developed an innovative fully student centred online high school option that gets disengaged kids back into learning and creating their own future.

The EMERGING INNOVATORS Award, sponsored by Stone & Chalk, was won by Allys Todd, the founder of ValAi, an AI, machine learning and distributed ledger platform that accurately predicts values for assets beneficial for managing investment and lending decisions.

The INNOVATION AND INTRAPRENEURSHIP IN GOVERNMENT Award, sponsored by Deloitte, was won by Serena Yang of Green Industries SA , who led the development of an Australian-first disaster waste management plan included in the State Emergency Plan, and deployed for the first time to effectively manage the clean-up after last season’s devastating bushfires.

The YOUNG INNOVATOR AWARD, sponsored by the Department for Education, was won by Kira Bain, who has developed Kaurna Language in Schools, a series of custodian endorsed teacher resource packs to support the teaching of Kaurna language.

About Women In Innovation SA

Women In Innovation SA is the peak body for innovative women across the State, with the mission to recognise, elevate and celebrate women in science, technology, engineering, the arts and maths. Run annually by Women in Innovation since 2014, the Winnovation Awards recognise and encourage South Australian women and girls undertaking pioneering work or projects.