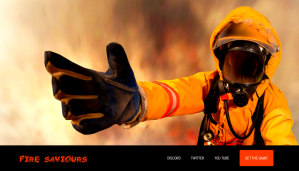 Fire Saviours is an action-based role-playing game in development that offers players the chance to act as firefighters to save people, homes, and other structures. The game will be available for Windows, Mac, Linux for its initial release. The rampant bushfires in Australia have been making headlines all over the world in recent months. This game aims to be a response to the emergency, drawing attention to it while also contributing a portion of the proceeds from the game to fire relief efforts.

Rather than focusing on killing enemies, as is so common in other games these days, the goal of Fire Saviours is to save people. Throughout the game, players will have to manage their energy while also dealing with the perils of dehydration, smoke inhalation, and extreme temperatures, all of which make the task at hand more challenging. They'll also have to prioritize protecting people and their property as fires grow and spread.

Within the game, players will have the option of purchasing upgrades and other incentives, generating income for the game's creators. A portion of the revenue from the game will go to Australian firefighting organizations, including CFA and RFS, helping to combat the fires currently ravaging a large portion of the country.

The game is already under development, and the creators are fast-tracking it as much as possible to start bringing aid to Australian firefighters right away in their time of need. The creators hope to release the game by mid-June. The game will be available on all major mobile platforms.

To help achieve this goal, they have launched a crowdfunding campaign on Indiegogo to raise funds to get the game completed on schedule. The bulk of the funds will go towards graphic design, sound engineering, and additional tools for completing the game, as well as outsourcing some of the development tasks to ensure rapid completion.

The campaign has a funding goal of about AUD 25,000, of which it has already raised nearly AUD 7,500. The campaign will run until March 25, putting the creators in a strong position to hit their target by the completion of the campaign.

Those who contribute to the campaign will be eligible for a series of rewards, including advance copies of the game, thanks in the game credits, or listing as a sponsor or co-producer. Campaign backers will also have the option of getting their own character included in the game with their name and face.