Inventor Rob Asker, a helicopter engineer for 38 years, and his medical technologist wife Suzanne were motivated to develop 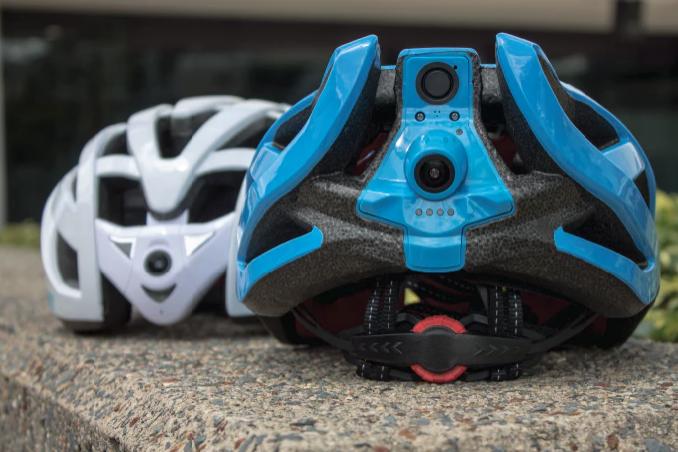 Cyclevision EDGE by the acute vulnerability of road cyclists. An average of 35 cyclists are killed each year on Australian roads, and thousands more sustain serious injuries, 85% as a result of collisions with motor vehicles.

Mr Asker himself has been the victim of not one, but two hit-and-run incidents.

“Just two weeks ago there was a court report in the Australian media about an elderly motorist who has denied dangerous driving -- he was accused of killing a cyclist after hitting her at a roundabout, dragging her body along the road and then driving off to go to the library,” Mr Asker said.  “These kinds of issues have led organisations like Bicycle Queensland to urge cyclists to use bike mounted cameras.”

The drawback, Mr Asker said, is that other cameras have to be removed from the bicycle frame when the cyclist leaves the bike unattended and then refitted, whereas the Cyclevision EDGE helmet simply goes with riders wherever they go.

At the touch of a button, the Cyclevision EDGE helmet records Full HD footage simultaneously from both cameras onto twin 32GB of internal memory. The free App and built-in Wi-Fi lets you stream live vision from the rear (or front) cameras to a mobile device mounted on the handlebars to create an electronic rear-view camera.

“We are passionate about rider safety and we look forward to delivering the Cyclevision EDGE helmet to the world's cycling community, not only to make road cycling safer, but as a platform to record their commuting and recreational cycling experiences,” Mr Asker said.

“The fact it is App-based means we can add new features as we progress simply by updating the software.”

The Queensland Government has given strong backing to this project with a substantial financial grant from the Advance Queensland Ignite Ideas fund, and the state’s Minister for Innovation and Tourism Industry Development and Minister for the Commonwealth Games, Hon. Kate Jones MP, has become an enthusiastic supporter of this Queensland invention.

When given a demonstration of a working pre-production prototype this week, she acknowledged the Cyclevision EDGE helmet as a fine example of Queenslanders developing world leading technological products, with the potential to make cycling safer for millions of cyclists around the world.

Bicycle Queensland and CycleLaw are two organisations that have also endorsed the Cyclevision EDGE helmet.

“This helmet is a game-changer," Ms Savage said. “Professional and amateur riders will be able to ride safely and capture their trips on camera for other riders and the community to enjoy, showcasing all that cycling has to offer.

“High quality camera footage from a helmet has not been viable, until now. We welcome this innovation from Cyclevision and are proud to see a world-leading product like this one come out of Queensland.”

Full HD 1080P front and rear cameras are fully integrated into an advanced bicycle helmet. With the ability to record 4 hour loops of footage from both cameras and at least 2.5 hours run-time from its 3,200mAh battery (extendable with auxiliary packs), the water-resistant (IP67) Cyclevision EDGE helmet is ready to capture all of your cycling adventures. The Cyclevision EDGE helmet will be certified to Australian/ NZ, North American (suitable for use in Canada), European and UK cycle helmet safety standards.

The Cyclevision EDGE helmet will be available for an Early Bird price of $550 AUD for a limited time only on Kickstarter.