Demand for home security installations is skyrocketing in Melbourne. An increase in the number of assaults and break-ins has unfortunately seen a shift in the psyche in the city and the state of Victoria. Victorians are feeling a lot less safe in their houses than they did a year ago. Recent fears about criminal gangs and violent crimes across the media has resulted in Melbournians further focusing on household safety and investing in home security.

Nearly all households utilise the services of professionals to secure their homes. According to David Legge, who heads up Jim’s Security in Australia, which provides residential and commercial security installations across Melbourne, “In 2017 demand from Melbournians for security installation services was extremely high. We saw a 35% increase on the previous year in the number of job requests we receive. As a result, we’ve been aggressively recruiting for franchisees and installers across metropolitan Melbourne to help service all of the interest.”

According to Paul Godden, who heads up franchise recruitment at Jim’s Security, which has been rapidly expanding across Australia, “The reality is we’ve just touched the surface. We expect to grow further with more franchises opening up across Melbourne in 2018. Demand is substantial particularly for home installations of alarm systems, CC-TV and monitoring systems.”

The rising fear of crime comes as the state recorded an increase in the number of assaults and break-ins, but a drop in malicious property damage. Assault, measured by those reported and unreported to police, was up 27% in 2017, while break-ins were up almost 10%. Malicious property damage fell by 17% while robbery was down almost 10%. Lisa Neville, Victoria’s Police Minister, was quoted on ABC Radio Melbourne as saying, “We’ve had six years of a rising crime rate in Victoria and we’ve seen some of those really high harm crimes occur, particularly amongst a small but significant group of youth offenders”

“We’ve been aggressively recruiting for franchisees and installers across metropolitanMelbourne to help service all of the interest.” – David Legge, Jim’s Security

While the State Government plans to ad 3,000 police over five years and is investing in crime prevention to reduce the crime rate, householders in the community haven’t been leaving anything to chance when it comes to their family’s safety.

A nationwide Productivity Commission report into the performance of government agencies, across Australia found that Victoria was the only state to have a major a dramatic drop in its residents feeling safe from crime. According to the National Survey of Community Satisfaction with Policing, 79 per cent of Victorians felt safe in their home at night in 2017. This is down from 87 per cent the year before. The survey questioned 8,100 Victorians throughout last year about their attitudes to crime.

The drive for security is endemic in Australian cities in 2018.  According to research firm IBISWorld, the industry is currently worth $6 billion dollars and employs over 54,000 people. This boom is expected to continue. IHS, a global information company, in their analysis expect the surveillance video market will surpass $2.5 billion by 2020. 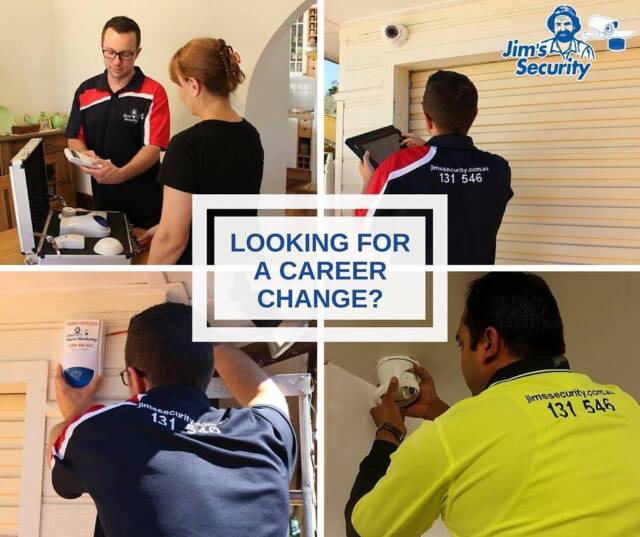 A growth market for a licensed installer to be entering

According to Paul Godden from Jim’s Security, “Running your own franchise in the sector can be an extremely lucrative business opportunity. It’s definitely a growth market for a licensed installer to be entering. Consumer demand for the latest technology and safety equipment continues to evolve, spurred on by greater interests in home security by the average home owner.”

Because the of the stringent policing and licensing requirements in the sector, typically, new franchisees joining are coming within the industry. All Jim’s Security Franchisees are members of the Australian Security Industry Association Limited (ASIAL).

Paul went on to say, “We’ve been talking to licensed professionals, electricians and cabling experts across the country. At the end of the day, now is a better time than any for them to try their hand at entrepreneurship, running their own business and being their own boss.”

We are a residential and commercial security installation and security consultancy company that is a
proud member of the Jim’s Group of Franchises, backed by many years in the security,
communications and electrical industry.

We provide effective and reliable solutions to ensure the safety and security of your home and
business. The company’s goal is to ensure your peace of mind with a combination of quality
products and service experienced technicians We are proudly committed to excellent customer service and satisfaction, while offering high-standard services at competitive rates. If you’re interested to find out more or are thinking about becoming a Franchisee with Jim’s Security, speak to us today to discuss how the Jim’s family could be right for you. Jim’s Security are
there to help you succeed, call 131 546 today or fill in our Franchise Enquiry Form.

Melbournians report feeling unsafe despite living in the most liveable city in the world. Jim's Security is now aggressively seeking out new franchisees to meet the demand head on.